By  Ethan Watters
TAGS Our Company

When a Jennie-O plant hired a deaf worker, staff members knew they’d have to change their operations. However, what they didn’t realize at first was the remarkable opportunity that awaited them. Tung Truong likes to tell the story of the first day he met Abdullahi Moallin. As part of the hiring process at the Jennie-O in Faribault, Minn., Truong, a production supervisor, takes applicants on a plant tour. The practice is a useful one. It allows prospective employees to see firsthand what sort of work they’ll be doing. Moallin stood out from the group right away. He had brought with him an interpreter who was rapidly translating Truong’s words into American Sign Language. Moallin, who was born in Somalia, lost his hearing as a result of a childhood illness.

But there were other things about Moallin that made him stand out. “This guy was different,” Truong remembered. “He was very excited and engaged with everything I was showing him and teaching him.”

As impressive as his enthusiasm was, Truong knew Moallin would need some accommodations. The safety of his workers around plant machinery is one of Truong’s top concerns, and it would take thoughtful effort and some creativity to ensure that he could communicate with Moallin both during a shift and in the case of an emergency. “After that first day meeting him, I strongly believed that something really good was going to come from hiring him,” Truong remembered. “I knew that working together, we could figure out how to keep him safe.”

Working on the tray-pack production line, Moallin proved to be a remarkably fast learner and a reliable worker. A few months later, Truong found he had another deaf applicant on his plant tour. Moallin, it turned out, had been so pleased with the opportunity he had been given at the Jennie-O facility, he had begun to spread the word to others in the deaf community. 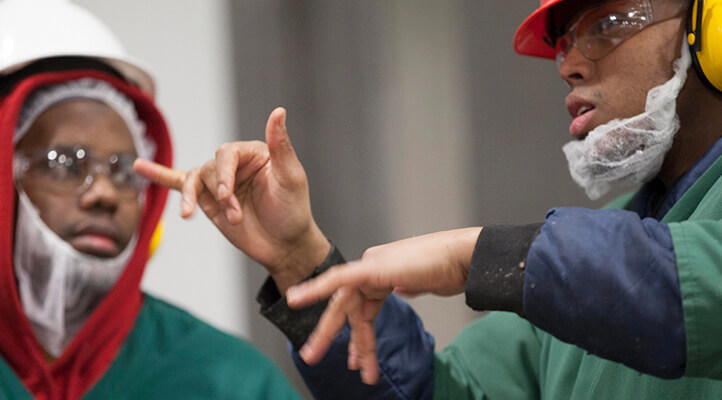 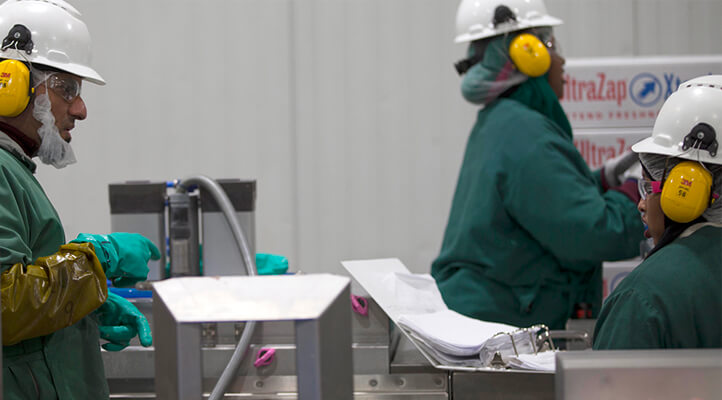 Expanding the roster
Truong hired his second deaf employee. Now, only a few years after hiring Moallin, the plant has employed more than 10 deaf or severely hearing impaired people.

“In the beginning, when I was the only deaf worker, it wasn’t easy,” said Moallin, communicating through an interpreter. “Now those of us who have already learned the job can teach the new hires and things are much easier.”

Offering help and advice to fellow members in the hearing-impaired community is common, said fellow employee Abdifatah Jimale through a sign language interpreter. Jimale was also born in Somalia, where he lost his hearing as a young boy. “I’m thankful to Abdullahi for taking the lead in introducing us to the Jennie-O plant. He not only encouraged many of us to apply, he’s taken the lead in helping orient and train us and has been an advocate for us.”

Sign language melting pot
The forms and styles of communication currently employed at the Jennie-O facility could be the subject of a doctoral dissertation in linguistics. Arabic sign language and American Sign Language seasoned with a Midwestern dialect particular to Minnesota are used between deaf employees. There is also a good amount of lip reading in both English and Arabic. Flashlights and pocket laser pointers are helpful in getting deaf workers’ attention or directing their focus. For more in-depth communications, many of the deaf workers wear pagers that can vibrate and deliver short written instructions. A few months ago, the plant installed a two-way videoconferencing system that can connect employees at the plant to a remote sign language translator. Both the equipment and the service are federally funded and provided free of charge to the plant.

To top it all off, Truong’s crew of workers has developed a body language that is specific to the environment and work. It’s a kind of pantomime or advanced version of charades that allows them to work efficiently as a team and communicate what needs to be done.

Acceptance and curiosity
The acceptance and encouragement of the hearing employees on the line have been critical to the success of the hearing-impaired crew. “Other employees have shown us great support,” said Mohammed Yahaya, an immigrant from Ghana who lost his hearing when he was an infant. “At break time, they’ve asked us to teach them some sign language. Now most can greet us in the morning through signing.”

“So many of the hearing employees use some sign language, that if you are watching the factory floor, you can’t tell who is deaf or hearing impaired and who isn’t,” said Plant Manager Jody Long. “The drive of these workers and the support they have received from their co-workers have been exemplary. They’ve overcome so many difficulties and challenges. They are dedicated to proving that they have the ability to achieve.”

The deaf community has fought for generations for equity in the workplace and much potential remains untapped. More than 144,000 working-aged Americans are totally deaf. Another 360,000 are unable to hear a normal conversation even with the use of hearing aids. Half of all cases of hearing loss can be easily treated or prevented for those who have access to health care. This explains why many deaf Jennie-O workers are from impoverished or war-torn countries like Somalia, where immunizations, antibiotics and child health care are not widely available.

Superpowers included
Truong believes his team of employees has benefited in numerous ways from the inclusion of hearing-impaired workers. There is an added bond within the group, he said, and better long-term retention. He has also observed that his deaf workers have different perceptual abilities that complement the abilities of those able to hear.

Researchers believe that perceptual deficits, like deafness or blindness, free up mental real estate that can be devoted to other senses. They have documented, for instance, that those who are deaf from an early age often have heightened visual perception, particularly when it comes to tracking motion using peripheral vision. Because they don’t have the 360-degree sensing ability that hearing allows, their 180-degree visual abilities become more acute. That ability, to both focus on an object and track other objects out of the corner of the eye, is a valuable talent on a busy production line. Truong has also noticed that his deaf employees can feel, through vibrations, whether a machine is working well or in need of maintenance.

“I think the management here has become convinced that we can do any job we are trained to do,” said Moallin. “We know how to overcome obstacles and succeed. I am so proud to work here.”

Truong is equally proud of his team. Both men acknowledge that it began with their partnership. Together they built a bridge of communication and trust that others could cross.

“My hope is that other companies and other plants will take our momentum and keep going,” said Truong, who plans to learn more American Sign Language. “The deaf workers I’ve met have such strength, and they really want to show off what they can do.”