By  Mary Burich
TAGS Our Company

At the end of many workdays, Dr. Kromm, director of technical services and live production at Jennie-O, has to answer a simple question. It comes from one of her children and goes something like this: “Mom, how were the turkeys today?”

It is not an easy question to answer given the scale of Kromm’s responsibilities. Every week, Jennie-O farmers begin the care for a million new baby turkeys (called “poults”). Over a year’s time, that amounts to roughly 52 million birds raised at more than 300 farms. Kromm’s job is to make sure those birds stay healthy. To do that, Kromm works with a staff of veterinarians, nutritionists and flock supervisors who visit Jennie-O farms on a weekly basis. Her team is in constant contact with farmers making sure that everything is going well and that any problems are addressed at the earliest stage. It is a complex system that involves more than 1,100 live production team members.

That repeated question from her children grounds her in the moral responsibility that is at the core of the work she and her team do.

“I want to make sure that at the end of the day, I can feel good talking to my kids about my job,” Kromm says. “I want to be able to come home and answer that question, ‘How were the turkeys today?’ and to be able to have a conversation with her and be proud of our organization.”

Originally from Sioux Falls, South Dakota, Kromm trained as a veterinarian at Iowa State where she also studied public health. After that, she completed an 18-month program at the University of Georgia, which focused exclusively on poultry medicine.

“That was like going to vet school all over again, but this time specifically for poultry-related health and diseases,” she says. 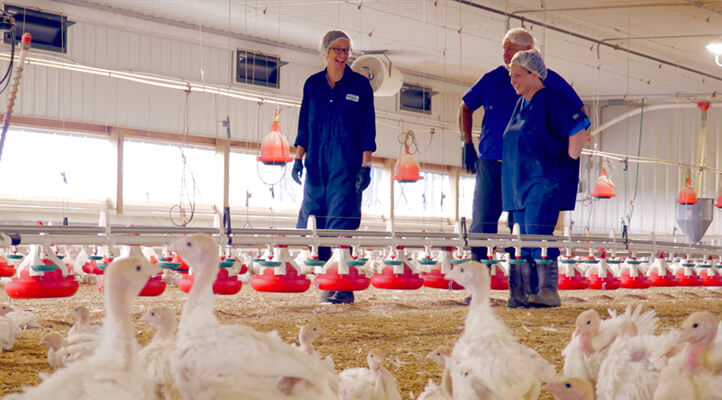 Kromm and her team at the turkey barn

Nutrition and Wellness
Her job basically falls into two categories: maximizing the health of the animal and preventing or treating illnesses. In terms of maximizing health, Kromm’s team is often fine-tuning the nutrition the birds receiveat each stage of development. Jennie-O runs two research farms where new feed mixtures are being constantly developed and tested.

“Those research farms are pretty unique to Jennie-O,” Kromm says. “We have the ability to do studies that last a couple of months to see which new feed products show promise. This is an area where there are new technologies coming out all the time.”

The benefits of these studies are many. Tweaking the amino acid in feed, for instance, might help the birds digest and utilize more of the food for growth and health. The better the bird digests its food, the less feed needs to be produced. In sum: Money is saved, birds are healthier and the process becomes more environmentally sustainable.

Preventing disease, managing outbreaks
Kromm and her team are always on the lookout for illnesses. The year 2015 was a difficult year for the turkey industry. Over the spring and early summer of that year the H5N2 avian influenza virus began to spread through chicken and turkey farms in the Midwest. Health officials suspected the virus came from a bird population migrating in the wild. Monitoring and responding to the outbreak as it evolved was a monumental task.

“If you had been a Jennie-O person in the heat of that battle, I think you really would have gotten the essence of what it means to be a farmer and to take care of animals,” Kromm says. “As hard as you try to keep the animals safe and healthy, sometimes there will be a disease. So you have to face the challenge and say: ‘What resources do we need to deploy? Where are they going to come from? Who’s going do it? How can we contain the event on that farm so we don’t have spillover to other facilities?’”

After the crisis passed, Jennie-O took a leadership role in studying the outbreak and setting new industry guidelines to handle potential outbreaks in the future. Farmers or companies may be proprietary about certain techniques that give them an advantage in a competitive industry, but when it comes to disease prevention, they share information openly. There is a keen understanding that a disease outbreak on one farm can quickly affect a whole region.

Jennie-O personnel have worked with the Minnesota Board of Animal Health to create a text alert system and an interactive map for poultry farmers to speed up the dissemination of critical information during in the rare case of an outbreak. Jennie-O now requires seasonal testing of turkey flocks during the fall and spring bird migration periods. Extensive bio-security measures have also been put in place, so people don’t bring viruses into barns or spread them from facility to facility.

Safe food for all of us
Kromm knows that the general public might not have a full understanding of how animals are cared for and raised.

And that makes answering her children’s daily questions a little bit easier.